This week, we have news about TikTok, NextDoor, Google, Twitter, Meta.

Google made an interesting announcement about a new option for searching on Google called Multisearch. This is a new way to search using both images and text, at the same time. For example, you would pick up your Google app and you’ll point it on, say, a particular kind of dress or some kind of a garment that you want to search for, and you will type a variation of it.

For example, you would point at a shirt and you look at a green shirt, but if you actually want to buy a black shirt in the same pattern, so you would just type the word ‘Black’ in the text column. But you’ll take a picture of that particular (green) shirt, and Google will pull up that dress and the related searches for you using both the text and the image as the parameters of the search. Very interesting. And whenever a company like Google that leads the search space makes an announcement about new search tools, we need to pay attention to it.

Financial Times released an article about how Meta as a company is planning to bring Web3 elements like NFTs and Creator Coins into its apps like Instagram and Facebook. It is fascinating to see how a big company like Meta is thinking about merging these elements. There are lots of details in that article. I definitely recommend you have a look at this article.

Let me read out just one paragraph to you that says, “According to one memo shared internally last week, Meta plans to launch a pilot for posting and sharing NFTs on Facebook in mid-May”. As soon as that. “This will be quickly followed by testing of a feature that will allow membership on Facebook Groups based on NFT ownership and another for minting NFTs”! Definitely a news that you need to watch out for. It’s great to see how Meta is thinking about this space.

Twitter starts testing an important feature called ‘Unmentioning’ yourself, where you have an option to remove yourself from a particular Tweet thread or a chat conversation that you are involved in on Twitter. When you to unmention yourself, three things happen. First, your username is untagged from the original tweet or on any replies, just like untagging yourself on a photo on another platform like Instagram. That is the first thing. Second, users won’t be able to mention you again with the same reply chain. So no one can mention you again in that thread.

Third, you will no longer be notified of any updates in that conversation. In a public conversation space like Twitter, it’s nice to have a feature like this where you can remove yourself from a conversation if it is not going in the right direction. I think it’s a good feature. Do have a look.

Their website says that nearly 1 in 3 US households have some kind of a presence on NextDoor. And 55 million business recommendations have been made from neighbors. And I know as churches and ministries, we are all about local communities and neighborhoods. That’s why I wanted to bring this to your attention. So if this fits into your plan of reaching a particular neighborhood in some form, via ads on NextDoor, then I think it’s worth exploring this path as a Nonprofit or a Church.

TikTok has released a new educational resource or a program called CAP University. CAP stands for Creative Agency Partnerships, where TikTok is wanting to teach agencies, creative agencies, how to use various resources, how to pitch to clients, how to structure their campaigns, how to learn from creators, licensing for music, and so on. So lots of interesting details.

I wanted to bring this to your notice because even if you’re not an agency (if you’re an agency you should definitely check it out) but as a nonprofit media team or as a Church media team, it’s important for you to understand these things – How does licensing work? How can you approach a campaign? So it might be worthwhile passing this information on to your Church media team so that they can take these programs and understand how to use TikTok for your Ministry. 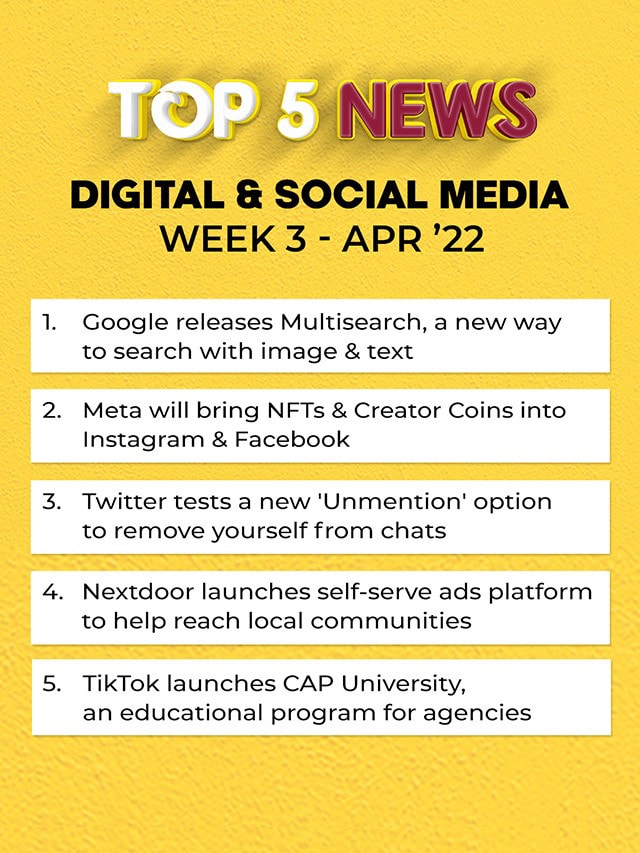