Welcome to The Connected Church News!

Top 5 latest Digital & Social Media News in 5 minutes, to help your ministry stay on top of industry trends.
This week, we have news about Clubhouse, Microsoft, Facebook, Twitter, Instagram.

Our first big news this week is from Clubhouse. Last week, Clubhouse announced that they are adding app support for new languages that will help them expand internationally. The announcement says that “…we are starting on Android with 13 new languages launching immediately, including French, German, Hindi, Indonesian, Italian, Japanese, Canada, Korean, Malayalam, Portuguese, Brazilian, Spanish, Tamil and Telugu. We will be adding support for iOS and additional languages soon…” so, amidst the competition from Twitter Spaces, Clubhouse seems to be thinking internationally where they are seeing some traction and the focus is now more on local languages and expanding out of just English-speaking audience. An interesting strategy.

Our next news is from Microsoft. Last week, Microsoft announced the launch of a new app called Loop, which is going to be part of the Office Document suite. You all know that Microsoft has a huge market share of Office Document space, which is Word, Excel, PowerPoint. Now they are adding this new component called Loop, which is a ‘canvas’ type of a document app. So it is like a Word document, but it has much more capabilities in the sense that it can hold, for example, it can have a chat space, it can have a table built into it, it can have files, it can hold various other documents and links and so on. It is a much more capable document, that is also collaborative, so you can open this document and you can collaborate with multiple people in many ways.

If you’ve heard of an app called Notion, they are the pioneers in this space, and they kickstarted this whole productivity app segment. Google released something like this earlier and now Microsoft is releasing this. But the interesting thing is, adding this to their Office 365 subscription will make it really valuable. Something for you to look out for.

Our next big news is from Facebook. Last week, Facebook announced multiple new tools and features for Facebook Groups. I know many churches and ministries listening to me use Groups actively for your Ministry, so this is something that you might want to pay attention to. There were many features related to the ‘look and feel’, the design, and also about streamlining the conversation, giving more ability for the admin group admin to guide the conversation in the right direction, etc. But the one announcement that I really wanted to bring to your notice is the testing of subgroups. Facebook says that subgroups will be groups that can be put under the main group.

For example, if you have a Ministry group on a particular topic, say finances or ‘marriage and family’, then you can have subgroups where you can have one subgroup for young adults who want to learn about that topic, and maybe married couple can be in one group, etc. So you can imagine the use cases for something like this where you can create subgroups for a particular topic. I see a lot of use cases for ministries for this particular feature. This and many more features announced. I will link to all the details in the description.

I see a lot of use cases where you can have a Twitter Spaces session for Ministry or Nonprofits, and share it with a wider group. Because not everybody is on Twitter and not everybody uses Twitter at the same time. So having a direct link like this will help you spread the content out to many people who are interested in listening to an audio experience. And this also in a way it’s like just going into the podcast space… in one way. So it’s interesting to see what’s going to happen as these two, live audio and podcast, start merging in some form. Very interesting. Let’s wait and watch.

The final news of this week is about Instagram. Instagram announced the launch of ‘Add Yours’ sticker to Stories. ‘Add Yours’ is a new type of sticker that you can add to your IG Story. Suppose you are doing a Story for your Ministry or nonprofit, and this is a picture, and you can add ‘Add Yours’ sticker to it, where your audience can click on that sticker, and it will open up their camera app, and they can add their own version of that image. So it’s quite an interesting engagement feature for Instagram Stories. It is similar to what TikTok has, in the duet feature.

I know that many ministries use Instagram Stories very creatively. So here is another tool for you to check out. Instagram keeps saying that’s Stories and Reels is where all the action is. So they are adding more features there day by day. 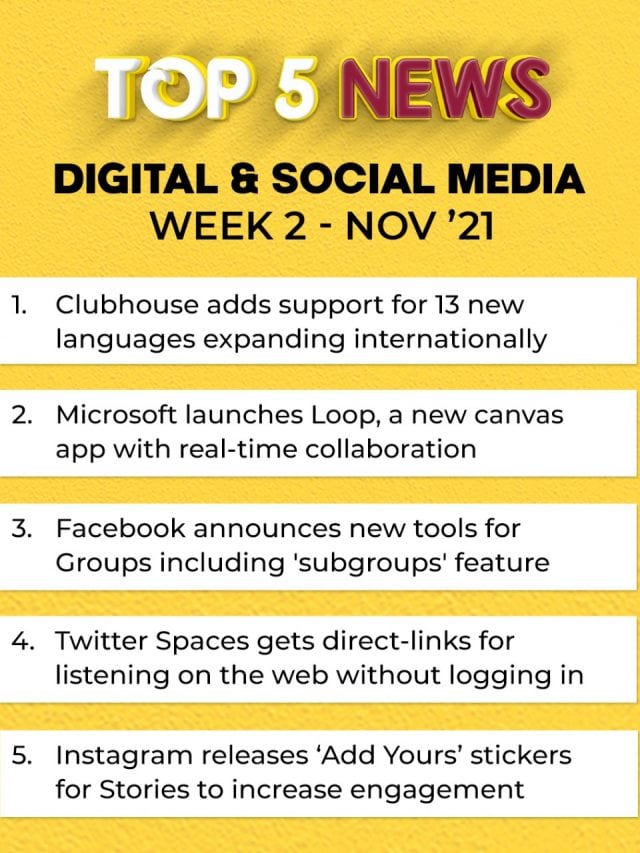