Welcome to The Connected Church News!

Our first big news of this week is from Facebook. Last week, Facebook made a major rebranding announcement related to their corporate entity, the company, Facebook company, which owns Facebook, Instagram and WhatsApp is now rebranding itself to the name Meta. But what I wanted to bring to your notice is the other announcements that came along with that. Not many news items are actually talking about it. But the keywords that you need to note in all these announcements, I will link to the founder’s letter, I will also link to all the other announcements that Facebook released, and some of the keywords are very interesting because this is not just about Metaverse.

This is not just about VR, virtual reality. This is about bigger things, broader things other than that. For example, they use the word ‘Digital connections’, they are using the word ‘Mixed Reality’, they are using the words ‘Experiences’. These are key terms in the digital space, which are important for you and me as a Church and Nonprofit leader to understand, because this is going to define the way people connect with each other and with us, as a Ministry, as a nonprofit, in the future, using technology.

Our next news is from Google. Last week, Google made two major announcements. One is about the release of a payment plan called Pixel Pass. Pixel Pass is similar to Apple’s effort, where they are connecting hardware, which is the mobile phone, along with all the premium subscription services. So they bring in one monthly subscription in which you get all the premium services. If you remember, Apple has one where you can pay once and then everything, including Apple TV, Apple Music, all of that is included in that. Similarly, Google is bringing out this Pixel Pass, where you will get Google One, YouTube Premium, YouTube Music, all of that built in, along with the hardware. It is linked to the hardware. It is quite an interesting revenue model. Do have a look.

The second major announcement is about WhatsApp and Android. If you remember, there were earlier announcements from WhatsApp about moving data, Whatsapp data, Whatsapp chat history, from iphone to Android, being enabled on Samsung devices. Now Android (Google) has said all Android devices are going to get that facility as long as they have Android 12 running on them. They’re just expanding that capability to multiple Android phones. And it’s going to be 2-way, so you can go from iPhone to Android, and Android to iPhone.

[News 3] Instagram opens up Stories ‘Link’ feature to all accounts

Our next big news is from Instagram. Last week, Instagram announced that you can now add links in your Instagram Stories even if you don’t have 10K followers or even if you’re not a verified account. You know that one of the a major drivers for people to go after a 10,000 follower mark was to get that link facility where you can swipe up when you are looking at Instagram Stories. But now, Instagram says they are rolling it out to all users, which is a good thing for churches, ministries, nonprofits because you can now start sending people back to various websites and other places that you want them to go to, when you do a story. So could be a significant announcement for churches and ministries. Do have a look and pass it on to your social media team.

Our next news is from TikTok last week, TikTok announced that they are expanding the video kit integration to more third party platforms and developers, which basically means that you will start seeing ‘Share to TikTok’ option in many more video tools than you used to. For example, Kapwing, which I know is a tool that many churches use, will now start getting that API and they will have that feature within their tool. They (TikTok) already have many integrations in places. Now, Tiktok is just expanding those integrations, which could be a good thing and make it much easier for you to create content for TikTok.

Our final news of this week is from Twitter, and it’s a big one. Twitter Spaces now gets recording and replay capabilities. When you start a conversation, some of you on iOS initially, because they are rolling this out to iOS users, you will see the recording option. You can choose to record that conversation. And after you finish the conversation, you can then make it available on Twitter timeline for people who were not able to join that conversation live. Now, this could be really useful for ministries and nonprofits in many circumstances, because not all your audience are going to be able to join that live conversation. Maybe you and your leaders can have this conversation, you can bring people on and have this interaction and engagement, and then make all of this available to your audience at a later point in time. Could be quite an interesting feature for Twitter Spaces to have. 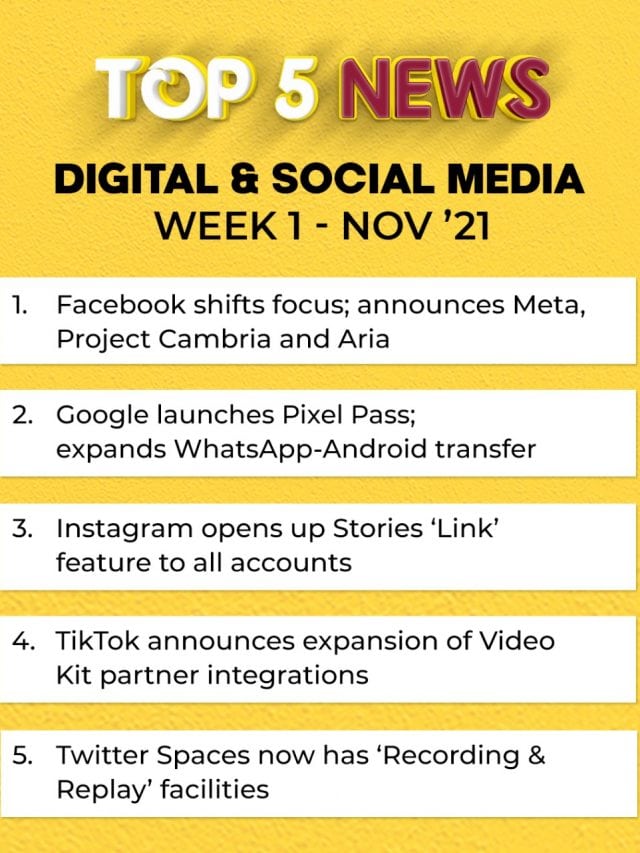