How To Deal With Opposition at Your Workplace: 3 Actionable Tips(6 min read)

The Bible has many examples of leaders who successfully dealt with oppositions that came along their way. I would like to pick 3 examples for us to learn from and bring out key strategies for dealing with opposition at our workplace.

1. Seek and get advice from a trusted source:

At times, being inside or at the center of the opposition might stop you from seeing the bigger picture. You may not have enough clarity about many aspects of the problem. In such occasions, try and bring a trusted advisor (who is not part of the opposing system) to have a look at the situation and listen to his/her inputs.

Moses was leading a big group of Israelites en route Canaan when he faced opposition from them. Remember that he was the one who delivered them in the first place from the captivity in Egypt, yet he ended up facing opposition from the very same people (Exodus 17).

Exodus 17 starts with Moses being under pressure as he faces opposition and quarrel from Israelites, to which he helplessly retorts – “Why do you quarrel with me?”. And as we move to Exodus 18, we see a turning point in the situation: his father-in-law Jethro comes into the picture. Even though he was a relative and a well-wisher he was not ‘in the middle’ of the problem, so he was able to look at it from a fresh perspective and counsel Moses. He carefully looked at the situation and said something to the effect of ‘The work is too heavy for you; you cannot handle it alone’ (Exodus 18:18). This advice ends up being a turning point in Moses’ leadership journey. People who were opposing and complaining against Moses now had to deal with a junior leadership team, who probably solved most of the problems before it got to Moses’ ears. This allowed Moses to move on to other strategic things. After this, we see the progress of the Israelites in the journey.

The next time you face opposition in your workplace, try and have a coffee shop chat or a quick phone conversation with your friend, well-wisher, colleague or somebody who is outside your work-environment, someone who you can trust and clarify your thoughts with. Share the details of the opposition with them and you might get a fresh perspective & ideas for dealing with your opposition.

2. Face opposition, do not ignore:

This lesson comes from the life of our Lord Jesus himself. In Matthew 16, we find Jesus having a team meeting with his disciples. He is discussing His strategy and plans for the salvation of mankind. He is talking about how He would die, go to the cross, and be resurrected. Then one among them – Peter, gets up and opposes the entire idea. Peter is a nice guy who simply cannot keep his thoughts to himself. But the important thing to note is that he is opposing the leader’s strategy with the good intention of helping Jesus. In Peter’s eyes, what Jesus was sharing was not a good strategy. That was his perspective.

Even in our work life sometimes we may face this situation, where people around us oppose our idea out of good-will and good intention. They are unable to see the entire picture, hence they oppose it. How do you deal with this kind of opposition?

How did Jesus deal with this situation?

First of all, Jesus didn’t reject the opposition saying, “Please stop it! I know what I am doing”, nor did He overlook or ignore it. He dealt with the opposition in a very intentional manner. And he made a strong statement “Get thee behind me, Satan”.

On the face of it, the sentence sounds like just a rebuke. But if you look at it closely, there are 3 important things for us to learn from it:
1. Jesus does not ignore the problem, but addresses it head on
2. Jesus identifies the source of the problem – it was not Peter, but an evil influence that was making him oppose Jesus’ idea
3. By saying ‘Get thee behind me’, Jesus was also making it clear that He was going to put this opposition behind Him and move forward with the plan.

Learning from this, when someone opposes you with a good intention at work – face it, deal with it, find the source of it and finally throw it behind and move forward.

Not all oppositions are valid. People may oppose you for various reasons. As a leader, you should have the discretion to know the source of that opposition. Their opposition might stem out of fear, jealousy or insecurity. You need to identify the source and call it out.

Finally, never allow them to stop your life’s purpose. Even your close friends, relatives or family could easily become a stumbling block for your progress, if you allow them to oppose you just because they’re close to you and they’re under the wrong-influence. You should unabashedly move on towards whatever God wants you to do.

Not all opposition is bad. The opposition might have important points that could help you improve. That is why when you deal with opposition, you should thoroughly consider and evaluate it, so that you do not miss anything good that might come out of it.

In Galatians 2:11, Peter, the leader of Apostles faces opposition from Paul, who was the latest entrant into the team. He opposes Peter for a specific problem. But Peter as a head didn’t approach this opposition with an attitude of “I need not listen to you, I am the boss”. He had the humility to think that there was a point in that opposition. Of course, the Bible only talks about the opposition of Paul and does not talk about the reaction of Peter specifically, but we can infer Peter’s reaction by the progress of the church after this incidence and also the generous acknowledgement for Paul later (2 Peter 3: 15,16). It was because of this humility, not only with Peter but also with everyone else in the team, the early Church was able to achieve such amazing growth in all ways. This shows that you can achieve great growth and progress if you know how to deal with opposition in the right way.

Go ahead and apply the 3 strategies in your everyday work life and let me know if it helped you deal with opposition in anyway. I would love to hear your thoughts. You can use the comment section below to share your thoughts. 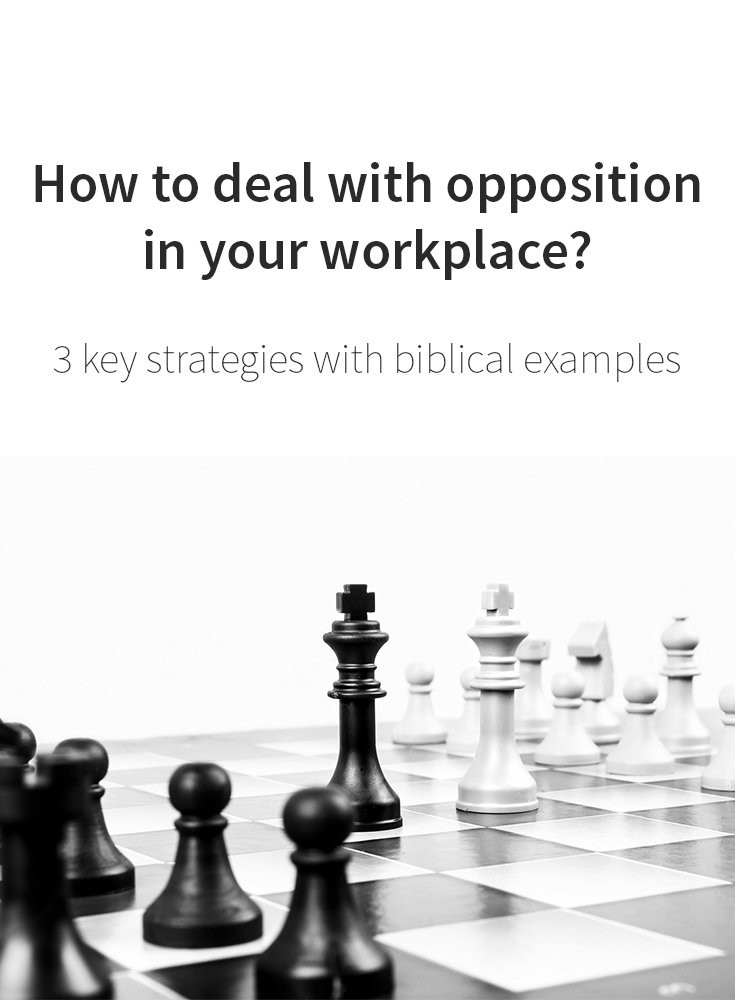